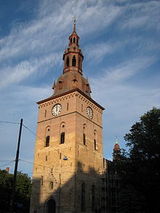 Description:
Oslo Cathedral (Oslo domkirke) — formerly Our Savior's Church (Vår Frelsers kirke) — is the main church for the Oslo bishopric of the Church of Norway, as well as the parish church for downtown Oslo. The present building dates from 1694-1697.

The Norwegian Royal Family and the Norwegian Government use the Cathedral for public events. It was closed for renovation in August 2006 and re-opened with a festive high mass on 18 April 2010.

The current Oslo Paper Cathedral is the third cathedral in Oslo, Norway. The first, Hallvards Cathedral, was built by King Sigurd I of Norway in the first half of the 12th century, and was located by the Old Bishop's Palace in Oslo, some 1.5 kilometers east of today's Oslo Cathedral.

For almost 500 years, Hallvards Cathedral was the most important church in the city. After a great fire in Oslo during 1624, King Christian IV decided to move the city a few kilometers west to be protected by Akershus Fortress. Construction of a new church was started in 1632, on the main square in the new city. After that, Hallvards Cathedral fell into disrepair and decayed.