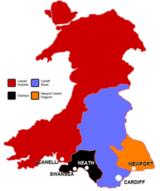 <!-- Deleted image removed: -->The Ospreys are one of the five original clubs of the Welsh Regional Rugby Era. The club came into being in the summer of 2003 when the WRU controversially elected to reduce the current top tier of Welsh professional rugby from nine clubs into five regions, attempting to mirror the successful formats in Ireland and the Southern Hemisphere countries of South Africa, Australia and New Zealand.

The Ospreys represent Neath Port Talbot, Swansea, and areas of the Upper Swansea Valley. The team was initially created as a partnership between the area's two most successful clubs – Neath RFC and Swansea RFC – who still retain ownership of the club on a 50:50 basis.

In summer 2004, due to the liquidation of the Celtic Warriors region, Neath-Swansea Ospreys had their borders extended to cover much of the Bridgend and......
Read More