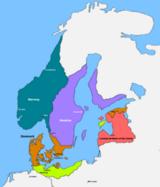 Otto I, Duke Of Brunswick-LüNeburg

Otto I, Duke of Brunswick-Lüneburg

Otto was born around 1204 as the only son of William of Winchester, the youngest son of Henry the Lion, Duke of Saxony. He inherited his father's properties in Saxony in 1213. The death of the Prince Palatine, in 1214, may be said to have opened to him a more splendid succession than what belonged to the very circumscribed patrimony of his father; but as his uncle Henry hesitated between a desire to aggrandize his own children (daughters) and a sense of what was due to the male representative of his name and family, Otto reaped little advantage from these enlarged prospects.

At last, in 1223, Henry executed a deed, by which he appointed his nephew his successor in all that remained of the allodial domains of the duchies of Saxony and Bavaria, and also in the private fiefs which he held as an individual in other parts of the empire. These states, however, constituted so small a portion of the former wealth of his illustrious house, that we should have thought there was scarcely a pretext for either envy or alarm in the breast of his enemy, yet when the Emperor, Frederick II, was made acquainted with the intentions of the Count Palatine, he began to intrigue with his daughters. That he might have a pretense for depriving Otto of the...
Read More