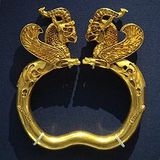 Description:
The Oxus treasure is a collection of 170 gold and silver items from the Achaemenid Persian period which were found by the Oxus river. Pieces from it are located in the Victoria and Albert Museum and in the British Museum (mainly the latter, where they have been on show from June 2007 in the newly re-displayed Room 52), with many items bequeathed to the nation by Augustus Wollaston Franks.

The griffin-headed bracelets from the hoard are typical of the 5th to 4th century BC court style of Achaemenid Persia. Bracelets of a similar form to ones from the treasure can be seen on reliefs from Persepolis being given as tribute, whilst Xenophon writes that armlets (among other things) were gifts of honour at the Persian court. Glass or semi-precious stone inlays within the bracelets' hollow spaces have now been lost.

A group of merchants acquired the Treasure (the precise findspot is unknown, but thought to be on the River Oxus); however, on the road from Kabul to Peshawar they were captured by bandits, who dispersed the Treasure before they were rescued by Capt. F.C. Burton, the British political officer in Afghanistan. He then helped them to recover the Treasure and, in gratitude, they sold him a companion piece to one of the bracelets now at the British Museum; this companion piece is now in the Victoria and Albert Museum. These merchants then continued to Rawalpindi to sell the rest of the...
Read More