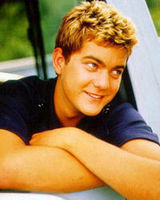 Pacey Witter is the son of the local chief of police John Witter and is the youngest of five children, including his older policeman brother, Doug Witter, and older sisters Gretchen and Kerry Witter (the third older sister was never named or ever seen). He is an academic underachiever who uses humor and sarcasm to relate to people, as well as to hide his emotional pain stemming from his very unhappy childhood. Because of Pacey's underachiever status in school and lack of common sense, he is branded by his uneducated, working-class family as their "great disappointment", or "great embarrassment". Both of his parents frequently call him a loser right in front of him, which has led to his very low self-esteem. Pacey's father is also an alcoholic and a domestic abuser, who either ignores or bullies Pacey every chance he gets. Pacey's best friend is Dawson Leery, and he appears in a few of Dawson's early films. Pacey is a romantic at heart, seeking from women the love and affection that he never receives from his parents. Some of Pacey's romantic interests were Tamara Jacobs (Season 1), Andie McPhee (Season 2), Audrey Liddel (Season 5), and Joey Potter, his true love.

In season one, Pacey falls in love with and loses his virginity to his English teacher, Tamara Jacobs (Leann Hunley). Unfortunately for Pacey,......
Read More