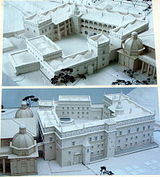 Palace Of The Grand Dukes Of Lithuania

Palace of the Grand Dukes of Lithuania

Description:
The Royal Palace of Lithuania () was a palace in Vilnius, Lithuania, built in the 15th century for the rulers of the Grand Duchy of Lithuania. The Royal Palace in the Lower Castle evolved over the years and prospered during the 16th and mid-17th centuries. For four centuries the Palace was the political, administrative and cultural center of the Grand Duchy of Lithuania. It was demolished in 1801. A new palace has been under construction since 2002 on the site of the original building. The partially completed palace was opened on 6 July 2009.

In the 13th and 14th centuries there were stone structures within the palace site; some archeologists believe that a wooden palace stood there as well. The stone Royal Palace was built in the 15th century, apparently after the major fire in 1419. The existing stone buildings and defensive structures of the Lower Castle, which blocked the construction, were demolished. The Royal Palace was built in Gothic style. The Keep of the Upper Castle, as well as the Royal Palace, were meant to host the coronation of Vytautas the Great. The Gothic palace had three wings; research suggests that it was a two-story building with a basement.

The Grand Duke of Lithuania Alexander, who later became King of Poland, moved his residence to the Royal Palace, where he met with ambassadors. He ordered the renovation of the palace. After his marriage to a daughter of Moscow's Grand Duke Ivan III, the royal couple lived and...
Read More