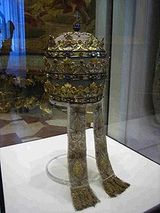 Coronation tiara for some popes

<!-- Commented out: -->Of all the tiaras in the papal collection, the Palatine Tiara is the most widely used, a fact reflected in the image which shows its worn lappets and its off-centre monde. It was particularly associated with the pontificates of Pope Pius XII (r 1939&ndash;1958) and Pope John XXIII (r: 1958&ndash;1963), both of whom chose to be crowned with it.

It was not however the official coronation tiara. Traditionally popes received their own tiara from their cardinalate see on election. However Pius XII prior to his election had not had a see: he had been Cardinal Secretary of State, and so did not receive a tiara, and so chose the 1877 tiara from the collection to be crowned with. In John XXIII's case, though he did receive his own tiara, his election was so unexpected that Bergamo, his native region, which donated the tiara, had not plans in train to manufacture a tiara quickly in the event of his election. His papal tiara was given to him in 1959. As a result he chose also to be crowned with the 1877 tiara.