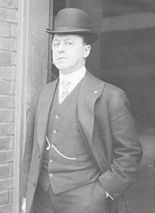 Description:
Clarence Henry "Pants" Rowland (February 12, 1879 - May 17, 1969) was a Major League Baseball manager for the Chicago White Sox from 1915 through 1918 who went on to become a major figure in minor league baseball. He was born in Platteville, Wisconsin. In his varied career, he was a barkeep, catcher, scout, major league umpire, minor and major league manager, and a boisterous baseball executive.

He started in baseball at age nine, where he earned his nickname, "Pants", from base-running antics while wearing his father's overalls at games of the Dubuque (Iowa) Ninth Street Blues.

Rowland served as a reserve catcher in the minors. Never a great player, his love of the game drove him to find other occupations. Pants worked as a scout in the so-called "Three-I" League (Illinois, Indiana, Iowa) for the Dubuque Miners. He worked his way into a managerial job, which proved to be his early calling.

He then became the manager of the Triple-I League Peoria Distillers. After the 1914 season, on December 17, Charles Comiskey, possibly as much for his legendary cheapness as for Rowland's talent, surprised White Sox fans and Chicago journalists when he called on Pants to manage the White Sox.

In his first year, Rowland and the White Sox finished 93-61, third in the American League; the next year, he finished second. And in 1917, he led them to an 100-54 record and a World Series title when they beat the New York Giants. Disagreements with Comiskey got...
Read More