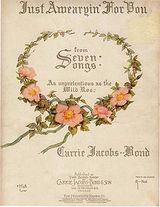 Description:
Parlour music is a type of popular music which, as the name suggests, is intended to be performed in the parlours of middle class homes by amateur singers and pianists. Disseminated as sheet music, its heyday came in the 19th century, as a result of a steady increase in the number of households with enough surplus cash to purchase musical instruments and instruction in music, and with the leisure time and cultural motivation to engage in recreational music-making. Its popularity waned in the 20th century as the phonograph record and radio replaced sheet music as the most common method of dissemination of popular music. This is the middle and low brow music which European classical music began to gradually and eventually self-consciously distance itself from beginning around 1790. (1989, p.4, 17-18, 321)

In contrast to the chord-based classical music era, parlour music features melodies which are harmonically-independent or not determined by the harmony. This produces parlour chords, many of them added tone chords if not extended such as the dominant thirteenth, added sixth, and major dominant ninth. Rather, the melodies are organized through parlour modes, variants of the major mode with the third, sixth, and seventh emphasized through modal frames such as the mediant-octave mode, which uses the third as a floor and ceiling note, its less common variants the pseudo-phrygian, in which the seventh and often fifth are given prominence, and submediant-octave mode.

Many of the...
Read More