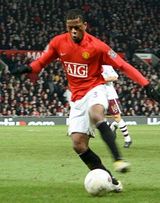 Description:
Patrice Latyr Evra (; born 15 May 1981) is a French international footballer who currently plays for English club Manchester United in the Premier League and the France national team. Originally an attacker, he primarily plays as a left back and is described as "the classic example of a modern full-back" who is renowned for his "pace, athleticism, and determination". Of Senegalese descent, Evra "offers a genuine attacking outlet down the left" and is also "strong in the air" despite his noticeably small frame. He is also known for his leadership ability and has served as captain of both Manchester United domestically and France internationally.

The son of a diplomat, Evra was born in Senegal and arrived in Europe when he was a year old. He was raised in France and began his football career playing for various clubs in the Île-de-France region such as hometown club CO Les Ulis and CSF Brétigny. In 1997, he had a stint at professional club Paris Saint-Germain. A year later, Evra seized his first footballing opportunity in neighboring Italy when he signed his first professional contract with Marsala in Sicily. He made his professional debut with the club and, in the ensuing season, joined Monza. After a year playing with Monza, Evra returned to France to play for Nice. Originally a midfielder, while playing at Nice, he was converted into a full back....
Read More