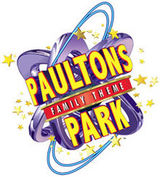 Description:
Paultons Theme Park is a family theme park situated in the village of Ower, near Romsey in Hampshire, England. The name is derived from the former Paultons Estate, on which the Park is situated. There has been a large investment over the last few years, which has seen the park transformed from a small local park to a major attraction aimed at family audiences. Originally the park was a country park and bird garden. Paultons now has over 60 family rides and attractions and still keeps a number of animals, including Meerkats, Penguins, South African Crowned Cranes, Touracos, and over 80 different species of exotic birds. The park has three roller coasters and two water rides.Opening 9th April 2011, Peppa Pig World will be the first dedicated Peppa Pig Theme Park in the world and will be situated within Paultons Theme Park.

The park is home to a wide variety of attractions, from the Cobra (the biggest and fastest) to the Flying Frog (a rollercoaster for all ages).

The Flying Frog opened in 2003, this unique roller coaster has a short height restriction and is a big hit with younger guests.

The Stinger opened in 2000, replacing the aging Runaway......
Read More