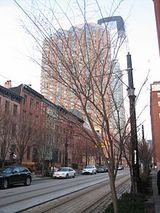 Description:
Paulus Hook is a community on the Hudson River waterfront in Jersey City, New Jersey, located one mile across the river from Manhattan. The name Hook comes from the Dutch word "hoeck" which translates into "point of land." This "point of land" has been described as an elevated area, the location of which is today bounded by Montgomery, Hudson, Essex and Warren Streets. The neighborhood's main streets are the east- and west-running Essex and Morris Streets. The waterfront of Paulus Hook is along the basin of the Morris Canal in a park with a segment of Liberty State Park. The Hudson-Bergen Light Rail has a Paulus Hook stop at Essex Street and the Liberty Water Taxi at Warren Street. The introduction of the light rail and development of office buildings on the Hudson Waterfront have brought more businesses to Morris Street including a number of restaurants with outdoor seating and small neighborhood shops.

Originally the location was called Arressick or Arisheck Island by the earliest settlers after a corrupted Lenape term, possibly from Kaniskeck meaning a long, grassy marsh or meadow.

The location was originally part of a tract of land purchased by Michael Pauw,Perhaps at Paulus Hook, in what is now Jersey City, or else at Castle Point, the trading station of Hobokan Hackingh. From...
Read More