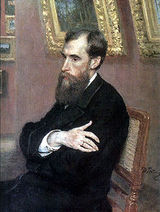 Tretyakov was taught at home. In the first half of 1850 he inherited his father's business and built up a profitable trade in flax, linen processing and the sale of textiles.

Together with other Moscow businessmen he acted as the founder of the Moscow merchant bank (becoming one of its heads), the Moscow commercial and industrial company, some other large firms. He amassed a considerable fortune (4.4 million rubles), consisting of real estate (5 houses in Moscow), securities, money and bills.

Tretyakov started to collect art in 1854 at the age of 24; his first purchase was 10 canvases by Old Dutch masters. He laid down for himself the aim of creating a Russian National Gallery . In his collection Tretyakov included the most valuable and remarkable products, first of all the contemporaries, from 1870 - mainly members of the society of circulating art exhibitions (Tovarishchestvo peredvizhnyh hudozhestvennyh vystavok or Peredvizhniki, Передвижники in Russian). He bought paintings at exhibitions and directly from artists' studios, sometimes he bought the whole series: in 1874 he acquired V.V. Vereschagin's "Turkestan series" (13...
Read More