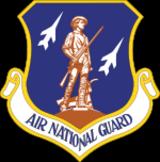 The Pennsylvania Air Guard is composed of 13 individual units, including 3 air wings. It is headquartered at Fort Indiantown Gap, located 27 miles (43&nbsp;km) north-east of Harrisburg, Pennsylvania.

The Pennsylvania Air National Guard was formally established in 1947. During the Vietnam War, the PA Air Guard flew 134 supply missions to Vietnam in 1966-1967, becoming the first reserve air force ever to enter a combat zone without actually being mobilized.

In 1972, widespread flooding in the aftermath of Hurricane Agnes resulted in 45 deaths and $ 3 billion in property damage. Nearly 13,000 Army and Air Guard members were called to state active duty to help with relief operations.

Previously the Pennsylvania ANG also included the 112th Air Refueling Group, which was assigned to Strategic Air Command on 16 October 1991, at Pittsburgh International Airport. It was equipped with KC-135s. It was reassigned to Air Mobility Command on 31 May 1992. However, following the end of the Cold War, it was...
Read More