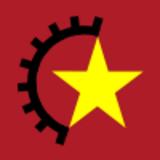 Description:
The People's Democratic Party () (PRD) is a democratic socialist party in Indonesia.

The party grew from student movements in the late 1980s in Java, Bali and Lombok established to protest against aspects of President Suharto's authoritarian New Order regime. One of these, the Yogyakarta Students Solidarity (SMY) was led by future party leader Budiman Sudjatmiko. The SMY was particularly active and established branches in other cities in Java and beyond. On 23 May 1994, a number of these groups and other activists declared the formation of the People's Democratic Association (also PRD), chaired by Sugeng Bahagijo. A split the following year led to Sugeng's leaving the PRD to establish the Indonesian People's Democratic Movement (PADI). The PRD was temporarily led by a presidium, headed by Budiman. It then joined with a number of students, farmers, artists and workers groups.

From 14–16 April 1996, the PRD held an extraordinary conference, at which it changed its name to the People's Democratic Party. Budimnan was elected chairman and Petrus Hariyanto the secretary general. The party established offices at the Indonesian Legal Aid Institute Foundation in Jakarta on 22 July at a ceremony attended by Megawati Sukarnoputri, who had been recently deposed as leader of the Indonesian Democratic Party (PDI) in a congress organized with the support of the government and the military, East Timor...
Read More