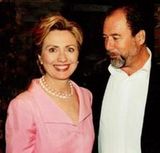 Description:
Peter F. Paul (born September 2, 1948) is a former lawyer and entrepreneur who was convicted for conspiracy and drug dealing, and later for securities fraud in connection with his business dealings with Spider-Man creator Stan Lee. He has repeatedly brought suit against Hillary Clinton, accusing her of lying about donations he solicited on behalf of her 2000 senatorial campaign.April Witt, , The Washington Post, October 9, 2005, p. W10.

In the 1970s, Peter Paul was a lawyer in Miami, Florida, representing foreign governments and political leaders in South America and the Caribbean. He also served as President of the Miami World Trade Center"Lawyer Extradited Back to U.S. from Brazil for Fraud Charges", Miami Herald, September 30, 2003. and was the original owner and operator of the largest Foreign Trade Zone in the U.S., Miami Free Zone Inc."Who Killed Stan Lee Media? Peter Paul Tells His Side of the Story", Comics Journal, May 2001, p. 6. he directed a fraud on the Cuban government of $8.75 million dollars by...
Read More