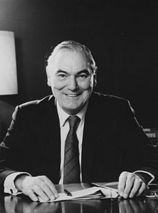 Parker was born in France on 30 August 1924, but spent part of his childhood in Shanghai, where his father worked for an oil company. The family were evacuated from China in 1937, and while his father went to work in Africa, his mother and the rest of the family settled in Bedford, England, where he attended Bedford School. After leaving school, he won a scholarship to study Japanese at the School of Oriental and African Studies, University of London, as one of the "Dulwich boys", 30 sixth-formers recruited to boost the ranks of military translators.Sadao Ōba The 'Japanese' war: London University's WWII secret teaching programme p11. Other "Dulwich boys" included Patrick Geoffrey O'Neill, John McEwan and Ronald P. Dore. In 1943 he joined the Intelligence Corps of the British Army, serving first in India and Burma, and later in the United States and Japan, eventually reaching the rank of Major. In 1947 he left the army, and studied history at Lincoln College, Oxford. At Oxford he met Shirley Catlin (the future Shirley Williams ) and they had a relationship. In her autobiography ("Climbing the Bookshelves") Williams says that "...by the spring of 1949 I was in love with him, and he, a little, with me..." . He stood unsuccessfully as the...
Read More