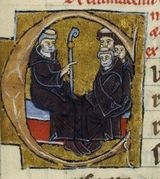 Description:
Peter the Venerable (about 1092 – December 25, 1156 in Cluny, France), also known as Peter of Montboissier, abbot of the Benedictine abbey of Cluny, born to Blessed Raingarde in Auvergne, France. He has been honored as a saint but has never been formally canonized.

Peter was "Dedicated to God" at birth and given to the monastery at Sauxillanges of the Congregation of Cluny. He took his vows there at age seventeen, swiftly rising in esteem and becoming professor and prior of the monastery of Vézelay at only twenty years of age. Later he went to the monastery at Domene. He was so successful in the fulfillment of his duties at Vézelay and Domene that by the age of thirty he was elected general of the order. Peter was a tireless advocate of reform within his order, which was in dire need of reconstruction after the deposing of the previous abbot, Pontius, by the pope. The Congregation of Cluny was also under attack by other orders and prominent monks and theologians, including St. Bernard of Clairvaux, a Cistercian monk. Successfully defending against these attacks, and completely reforming his order, Peter earned the appellation of "venerable."

Peter became a popular figure of the Roman Catholic Church, an international figure and associate of many national and religious leaders of his day. He attended many of the important religious councils of his generation, including the Council of Pisa in 1134, where he helped to avert a potential schism in...
Read More