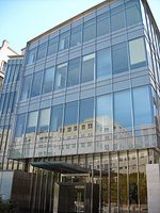 Description:
The Peter G. Peterson Institute for International Economics (Peterson Institute), formerly the Institute for International Economics, is a private, non-profit, and nonpartisan think tank focused on international economics, based in Washington, D.C. It was founded by C. Fred Bergsten in 1981, in response to a proposal from the German Marshall Fund.<small>The Institute's annual budget is about $9 million and it is financially supported by a wide range of charitable foundations, private corporations, and individuals; as well as earnings from the Institute's publications and capital fund.

The Institute moved into its own award-winning building, designed by James von Klemperer of Kohn Pedersen Fox. It includes full conference and videoconferencing facilities, at 1750 Massachusetts Avenue ("Embassy Row"), NW, Washington, DC, in the summer of 2001. It is located across from the Brookings Institution, diagonally across from Carnegie Endowment for International Peace, and next to the Paul H. Nitze School of Advanced International Studies.

Other prominent members of the institute's board of directors include: