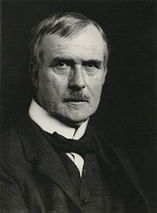 Philip Wilson Steer was born in Birkenhead, in Merseyside, near Liverpool. He was the son of the portrait-painter, Philip Steer (1810-1871).

After finding the examinations of the British Civil Service too demanding, he became an artist in 1878. He studied at the Gloucester School of Art and then from 1880 to 1881 at the South Kensington Drawing Schools. He was rejected by the Royal Academy of Art, and so studied in Paris between 1882 and 1884, firstly at the Académie Julian, and then in the École des Beaux Arts under Cabanel, where he became a follower of the Impressionist school.

Between 1883 and 1885 he exhibited at the Royal Academy. In 1886 he became a founder of the New English Art Club, with whom he continued to exhibit regularly.

Between 1893 and 1930 he taught painting at the Slade School of Fine Art, London. He lived in Chelsea, but in the summers painted in Yorkshire, the Cotswolds and the West Country and on the south and east coasts of Britain.

During World War I he was recruited by Lord Beaverbrook, Minister of Information, to paint pictures of the Royal Navy.