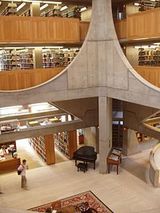 When it became clear in the 1950s that the library had outgrown its existing building, the school initially hired an architect who proposed a traditional design for the new building. Deciding instead to construct a library with a contemporary design, the school gave the commission to Louis Kahn in 1965. In 1997 the library received the Twenty-five Year Award from the American Institute of Architects, an award that recognizes architecture of enduring significance that is given to no more than one building per year.

Kahn structured the library in three concentric square rings. The outer ring, which is built of load-bearing brick, includes all four exterior walls and the library carrel spaces immediately inside them. The middle ring, which is built of reinforced concrete, holds the heavy book stacks. The inner ring is a dramatic atrium with enormous circular openings in its walls that reveal several floors of book stacks.

The first library at Phillips Exeter Academy was a single small room. A member of the class of 1833 remembered it as containing "old sermons and some history, scarcely ever read"....
Read More