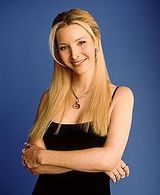 Description:
Phoebe Buffay-Hannigan is a fictional character on the U.S. television sitcom Friends (1994&ndash;2004), portrayed by Lisa Kudrow. Kudrow received an Emmy Award and a Golden Globe nomination for her performance.Her twin sister was Ursula Buffay, who first appeared on Mad About You.

Phoebe never actually comes out and says what religion she is, and her beliefs seem drawn from a variety of world religions. She believes in reincarnation, and that a priest could damn a soul for all eternity. She can see people's auras, and apparently can tidy them up if they are in disarray. In season 10 she prayed to Thor. Her Grandmother's cab had a sign that said, "Beam me up, Jesus", possibly left over from when her grandmother owned the cab. In the episodes The One with the Lesbian Wedding and The One with the Flashback she wears a cross necklace, although it is uncertain whether this is simply a fashion statement.POO

Phoebe Buffay is the younger twin daughter born to Phoebe 'fitton' Abbott (Teri Garr) and Frank Buffay on February 16, 1967; her twin sister, Ursula (Lisa Kudrow), was born one minute later. Frank was married to Abbott's best friend, Lily, at the time; Lily adopted Phoebe and Ursula. The sisters were unaware until adulthood that Lily was not their biological mother. Phoebe does not talk much about her early years except to note that she was from upstate New York, that...
Read More