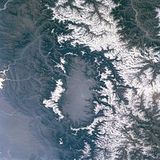 Description:
The Pir Panjal ranges lie in the Inner Himalayan region, running from east southeast to west northwest across Himachal Pradesh State in India and Kashmir as well as Pakistan-administered Kashmir,where the average elevation varies from to . The Himalayas show a gradual elevation towards the Dhauladhar and Pir Panjal ranges. Pir Panjal is the largest range of the lower Himalayas. Near the bank of the Sutlej river, it dissociates itself from the Himalayas and forms a divide between the rivers Beas and Ravi on one side and the Chenab on the other.

The Pir Panjal pass to the west of Srinagar, the Banihal pass () which lies at the head of the Jhelum River at the southern end of the Kashmir valley, and the Sythen pass connecting Jammu and Kashmir with Kishtwar are some among the important passes in the region.

Rohtang La is a mountain pass on the eastern Pir Panjal range connecting Manali in Kullu Valley to Keylong in Lahaul Valley. Haji Pir Pass is a mountain pass on the western Pir Panjal range between Poonch and Uri. Deo Tibba () and Indrasan () are two important peaks at the eastern end of the mountain range. They can be approached from both the Parvati-Beas Valley (Kulu District) and the Chandra (Upper Chenab) Valley (Lahaul and Spiti District) in the Indian state of Himachal Pradesh. The hill station of Gulmarg in Kashmir lies in this range.

Hajipir Pass is in the Pakistan-administered Kashmir area. It has been...
Read More