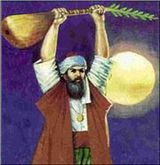 Description:
Pir Sultan Abdal (ca. 1480 – 1550) was a legendary Turkish Alevi poet, whose direct and clear language as well as the richness of his imagination and the beauty of his verses led him to become loved among the Turkish people. Pir Sultan Abdal reflected the social, cultural and religious life of the people; he was a humanist, and wrote about resistance, love, peace, death and God. He was also rebellious against authoritarian rule which led him into problems with the Ottoman establishment.

Pir Sultan Abdal's ethnic origin is unknown however his poetry was in the Turkish language and he originated from Sivas, which is mostly populated by ethnic Turks. Although Some researchers believe "Pir Sultan" wasn't just the one in Sivas, who has rebelled against the state and hanged for his religious convictions by Hızır Paşa's orders. Most of the information about him and his era we find in his verses, which reveal him as cultivated well educated and intellectual.<!--General Information about "Abdal":"Abdal" is the plural of "Badal" or "Badeel", and means those who get replaced OR those who serve as a partial replacement to the role of the Prophets. "Abdal" are the group of true pure believers in God the ONE Almighty "Allah". They serve God during their life-time. Upon the demise of any one of them, he gets replaced by another selected by God from a larger group said to be the 500...
Read More