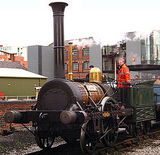 Description:
Planet was an early steam locomotive built in 1830 by Robert Stephenson and Company for the Liverpool and Manchester Railway. The ninth locomotive built for the L&MR, it was Stephenson's next design after the Rocket. It was the first locomotive to employ inside cylinders, and subsequently the 2-2-0 type became known as Planets. On 23 November 1830 No.9 Planet ran from Liverpool to Manchester in one hour. Six further of the type were ordered by the L&MR from Robert Stephenson & Co. Three more were supplied by Murray & Wood in Leeds, to whom Robert Stephenson & Co. had sent the drawings for their manufacture.. The Planet (from 1830) and the Patentee (from 1833, also designed by Stephenson) were the first locomotive types to be built in large numbers..

The Planet locomotives appear closer to subsequent types, and conversely look quite different from Rocket although only a year separated these two designs (Stevenson's Northumbrian representing an intermediate evolutionary step).

A modern working replica was built in 1992 by the Friends of the Museum of Science and Industry (MOSI) in Manchester, and is operated by volunteers every summer to provide rides for visitors.