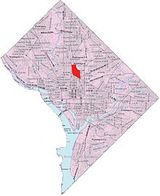 Description:
Pleasant Plains is a neighborhood in central Washington, D.C. largely occupied by Howard University. For this reason it is also sometimes referred to as Howard Town or, less frequently, Howard Village.

It is situated in the Northwest quadrant of the city and bordered by 2nd Street, and McMillan Reservoir to the east; Florida Avenue and Barry Place to the south; Sherman Avenue to the west; and Harvard Street to the north. It is flanked on the eastern side by the Washington Veteran Affairs Medical Center and Washington Hospital Center, and by the Columbia Heights and Park View neighborhoods on the west and north sides.

Pleasant Plains, Howard University notwithstanding, is a residential neighborhood. A large portion of its residents are Howard affiliates, either students or employees. One of its major community anchors is the Banneker Recreation Center on Georgia Avenue, which reopened in July 2007 after a year of renovations. The adjacent Benjamin Banneker Academic High School has ranked among the 100 best public schools in the United States.

Pleasant Plains is in Ward 1.

The neighborhood is a small portion of a large colonial estate named "Pleasant Plains," owned by the Holmead family. The property stretched from today’s Spring Road to Columbia Road, and from Georgia Avenue toRock Creek. The estate was apportioned and sold off over the course of the 19th century and divided into suburbs until it was annexed by...
Read More