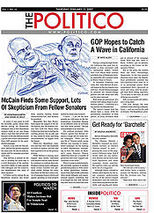 Description:
Politico is an American political journalism organization based in Arlington, Virginia, that distributes its content via television, the Internet, newspaper, and radio. Its coverage of Washington, D.C., includes the U.S. Congress, lobbying, media and the Presidency. It was a sponsor of the 2008 Republican Presidential candidates debate at the Ronald Reagan Presidential Library on May 3, 2007, and the 2008 Democratic Presidential candidates debate at the Kodak Theater on January 31, 2008.

Politico is financed by Robert Allbritton, chairman and chief executive of Allbritton Communications, which owns television stations in Washington, D.C., and elsewhere, all affiliated with the Disney-owned ABC network.

The newspaper has a circulation of approximately 32,000, distributed for free on Capitol Hill and elsewhere in Washington, D.C. The newspaper prints up to five issues a week while Congress is in session, and sometimes publishes one issue a week when Congress is in recess.<ref...
Read More