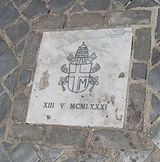 Description:
The first attempted assassination of Pope John Paul II took place on Wednesday, May 13, 1981, in St. Peter's Square at Vatican City. The Pope was shot and critically wounded by Mehmet Ali Ağca while he was entering the square. The Pope was struck 4 times, and suffered severe blood loss. Ağca was apprehended immediately, and later sentenced to life in prison by an Italian court. The Pope later forgave Ağca for the assassination attempt.

Attempted assassination of the Pope

Beginning in August 1980 Ağca, under the alias of Vilperi, began criss-crossing the Mediterranean region, changing passports and identities, perhaps to hide his point of origin in Sofia, Bulgaria. He entered Rome on May 10, 1981, coming by train from Milan.

According to Ağca's later testimony, he met with three accomplices in Rome, one a fellow Turk and two Bulgarians, with operation being commanded by Zilo Vassilev, the Bulgarian military attaché in Italy. He said that he was assigned this mission by Turkish mafioso Bekir Çelenk in Bulgaria.

According to Ağca, the plan was for him and the back-up gunman Oral Çelik to open fire on the pope in St. Peter's Square and escape to the Bulgarian embassy under the cover of the panic generated by a small explosion. On May 13 they sat in the square, writing postcards waiting for the Pope to arrive. When the Pope passed, Ağca fired several shots with a Browning Hi-Power semi-automatic pistol, and...
Read More