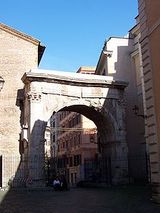 Description:
The Porta Esquilina was a gate in the Servian Wall Platner, S.B. and Ashby, T. A Topographical Dictionary of Ancient Rome. London: Humphrey Milford Oxford University, Press. 1929 Tradition dates it back to the 6th century BC, when the Servian Wall was said to have been built by the Roman king Servius Tullius, however modern scholarship and evidence from archaeology indicates a date in the fourth century BCHolloway, R. Ross. The Archaeology of Early Rome and Latium. London and New York: Routledge Press. 1994. The Porta Esquilina is also known as the Esquiline Gate.

The Porta Esquilina allowed passage between Rome and the Esquiline hill, at the city’s east. The Esquiline hill served as Rome’s graveyard during the Republic and later as an area for some the emperor’s most beautiful gardens such as the Gardens of Maecenas.Speake, Graham. A Dictionary of ancient history. Oxford, OX, UK: Blackwell Reference, 1994. Connecting northward to the Esquiline Gate was the agger, the heavily fortified section of the Servian Wall. Palmer, Robert E. A. Jupiter Blaze, Gods of the Hills, and the Roman Topography of CIL VI 377. American Journal of Archaeology, Vol. 80, No. 1, pp. 43-56. (Winter, 1976) Just southwest of the Esquiline Gate were notable locations such as Nero’s Golden House, the Baths of Titus, and Trajan’s Baths....
Read More