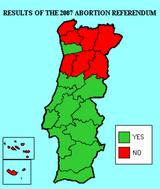 Description:
An abortion referendum took place in Portugal on February 11, 2007, to decide whether to legalise abortion up to ten weeks. The referendum was the fulfillment of an election pledge by the governing Socialist Party of Prime Minister José Sócrates."." (February 12, 2007). BBC News. Retrieved February 12, 2007.

Official results of the referendum showed that 59.24% of the Portuguese approved the proposal put on ballot, while 40.76% rejected it. However, only 43.61% of the registered voters turned out to vote. Since abstention was over 50%, according to the Portuguese Constitution, these results are not legally binding, and parliament can legally decide to disregard them. Prime Minister Sócrates nevertheless confirmed that he would expand the circumstances under which abortion was allowed, since a majority of voters had been in favour.

The question in the referendum was:

Under the current law, abortions are allowed up 12 weeks if the mother's life or mental or physical health is at risk, up to 16 weeks in cases of rape and up to 24 weeks if the child may be born with an incurable disease or deformity. The new law, approved on 9 March 2007, allows abortions on request up to the tenth week."." (March 9, 2007). BBC News....
Read More