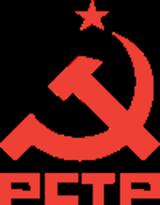 Description:
The Portuguese Workers' Communist Party/Reorganized Movement of the Party of the Proletariat (Portuguese: Partido Comunista dos Trabalhadores Portugueses / Movimento Reorganizativo do Partido do Proletariado or PCTP/MRPP) is a Maoist political party founded in 1970 in Portugal. On the ballot, its name appears as the Portuguese Workers' Communist Party, omitting the "Reorganized" part of the name; however its acronym remains unchanged. Its first secretary-general was Arnaldo Matos.

Originally called merely the MRPP, the party's political orientation has been Maoist since its foundation. In 1971, still during the conservative and authoritarian dictatorship led by Marcello Caetano, the party began issuing a newspaper called Luta Popular (People's Struggle). The party was among the most active resistance movements before the Portuguese democratic revolution of 1974, especially among students of Lisbon. After the revolution, the MRPP achieved fame for its large and highly artistic mural paintings. It was intensely active during 1974 and 1975. At that time, the party had members that later came to be very important in national politics, for example, José Manuel Durão Barroso and Fernando Rosas, who subsequently left the party. The party, however, never managed to elect a single MP in legislative elections.

During the revolutionary period of 1974 and 1975, the MRPP was accused (mainly by the Portuguese Communist Party) of being an...
Read More