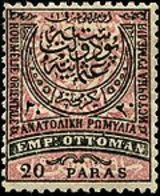 Description:
Eastern Rumelia or Eastern Roumelia was an autonomous province (vilayet) in the Ottoman Empire from 1878 to 1908; however it was under Bulgarian control from 1885 (see Bulgarian unification).

The province is remembered today by philatelists for having issued postage stamps from 1880 on. The first issue consisted of several kinds of overprints on stamps of Turkey, including "R.O.", a pattern of bars, and "ROUMELIE / ORIENTALE". These overprints are uncommon and extensively counterfeited.

Stamps of the contemporaneous Turkish design appeared in 1881, differing from Turkish stamps by having the French inscription "ROUMELIE ORIENTALE" in small letters along the left side. A second issue of this design, with changed colors, was issued in 1884. Most of these types are quite common.

On September 10, 1885, the existing Rumelian issues were overprinted with two different images of the Bulgarian lion, and then with the lion in a frame and "Bulgarian Post" in Bulgarian (Cyrillic letters). As with the first overprints, these are uncommon, with prices ranging from US$&nbsp;6 to $&nbsp;200, and counterfeits are widespread. From 1886 on, the province used Bulgarian stamps.