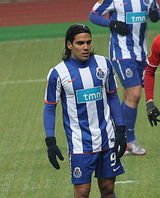 Description:
Radamel Falcao García Zárate (born 10 February 1986), commonly known as just Falcao, is a Colombian football forward who currently plays for Porto. He is a natural goalscorer notable for his finishing and fantastic heading ability, despite his average height.

Radamel prefers to be called by his middle name, Falcao, though he is sometimes referred to by the nickname El Tigre (The Tiger). Falcao is a dynamic striker noted for his ability to finish with both feet, a strong burst of pace, and a powerful header. Falcao is a second generation footballer: his father, Radamel García, played professionally as a defender in Colombia. Falcao is named after the 1980s Brazilian and A.S. Roma legend Falcão. He is a devout Christian and leader of the Church youth groups "Locos por Jesús" and "Campeones para Cristo."

As a youth, Falcao began playing at Fair Play, a Colombian football school, before joining the youth system of Bogota's Millonarios club. At the age of 15, Falcao was discovered by River Plate while playing for the Colombian U-17 side and was...
Read More