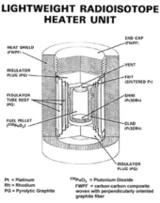 Description:
Radioisotope heater units are small devices that provide heat through radioactive decay. They are similar to tiny radioisotope thermoelectric generators (RTG), and normally provide about one watt of heat each, derived from the decay of a few grams of plutonium 238, although other radioactive isotopes could be used. The heat produced by these RHUs is given off continuously for several decades, and theoretically (in nominal amounts) for up to a century or more.

In spacecraft RHUs are necessary to heat critical components and subsystems. RHUs also reduce spacecraft complexity, by making heater subsystems unnecessary. By having as few heating subsystems as possible, the overall complexity of the spacecraft can be reduced.

Their function is to provide highly localized heating of sensitive equipment (such as electronics) in deep space. They are also used in RTGs to generate electricity by combining several tens of them together.

Virtually all the deep space missions that have involved sending probes past Mars's orbit have used RHUs, because insolation decreases as the inverse square of distance from the Sun, requiring an additional heat source to keep the spacecraft systems at normal operating temperature, and to provide electricity in place of photovoltaic cells used closer to the Sun.

The Cassini-Huygens spacecraft at Saturn contains 82 of these units (in addition to three main RTGs for power generation);...
Read More