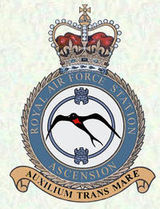 In 1939 Ascension became important as a HF/DF radio station covering trade routes. After the United States entered World War II, an airstrip was built using a US task force after a nearby colony of Sooty Terns (locally called 'Wideawake' birds because of their loud, distinctive call, which would wake people early in the morning).

The first aircraft to land on Ascension Island was a Fairey Swordfish from HMS Archer in 1942. In 1943 the United States Army Air Force set up Wideawake Airfield, by arrangement with the British government. The airfield was abandoned at the end of the war, and fell into disuse. The Americans returned in 1956, and reopened the airfield in 1957. The runway was lengthened and widened in the mid 1960s to allow for larger aircraft. USAF then, and later NASA established missile tracking facilities based at Cat Hill. Although NASA usage ended in 1967, USAF continues its usage with several hundred personnel, mostly contractors.

RAF Ascension Island was re-garrisoned by the RAF in 1982...
Read More