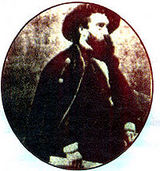 Description:
Raffaello Carboni (15 December 1817 – 24 October 1875) was an Italian revolutionary and writer. He is primarily remembered now as the author of the main eyewitness account of events at the Eureka Stockade in Ballarat, Australia.

Raffaello Carboni was born in Urbino, Italy in 1817. Dedicated to the cause of Italian nationalism, he fought with the forces of Mazzini and Garibaldi to free Italy from Austrian influence. After the fall of the Roman Republic (1849–1850), he fled to London and then to Melbourne. He arrived on the Ballarat goldfields in 1853, and became a member of the miners' central committee. By the time of the Eureka Stockade he had been on or around the goldfields for almost two years. On 30 November 1854, he called on all miners "irrespective of nationality, religion or colour to salute the Southern Cross as a refuge of all the oppressed from all countries on Earth." When the stockade was attacked on 3 December 1854, he remained a spectator.Australian Poets and their Works, by William Wilde, Oxford University Press, 1996 He was, however, arrested and tried for treason, but later acquitted in March, having been taken ill with dysentery in gaol. In July 1855 Carboni was elected to the local court at Ballarat to adjudicate mining disputes. His book, The Eureka Stockade, the only complete first-hand description and analysis of the causes of the attack on the Eureka Stockade, was published a year after the...
Read More