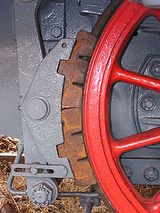 Description:
Brakes are used on the cars of railway trains to enable deceleration, control acceleration (downhill) or to keep them standing when parked. While the basic principle is familiar from road vehicle usage, operational features are more complex because of the need to control multiple linked carriages and to be effective on vehicles left without a prime mover. Clasp brakes are one type of brakes historically used on trains.

In the earliest days of railways, braking technology was primitive. The first trains had brakes operative on the locomotive tender and on vehicles in the train, where "porters" or, in the United States brakemen, travelling for the purpose on those vehicles operated the brakes. Some railways fitted a special deep-noted brake whistle to locomotives to indicate to the porters the necessity to apply the brakes. All the brakes at this stage of development were applied by operation of a screw and linkage to brake blocks applied to wheel treads, and these brakes could be used when vehicles were parked. In the earliest times, the porters travelled in crude shelters outside the vehicles, but "assistant guards" who travelled inside passenger vehicles, and who had access to a brake wheel at their posts supplanted them.

The braking effort achievable was limited, and an early development was the application of a steam brake to locomotives, where boiler pressure could be applied to brake blocks on the locomotive wheels. It was also...
Read More