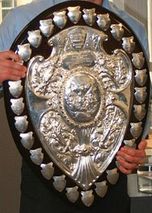 Description:
<!-- Deleted image removed: -->The Ranfurly Shield, colloquially known as the Log o' Wood, is a trophy in New Zealand's domestic rugby union competition. First played for in 1904, the Ranfurly Shield is based on a challenge system, rather than a league or knockout competition as with most football trophies. The holding union must defend the Shield in challenge matches, and if a challenger defeats them, they become the new holder of the Shield.

The Shield is currently held by Southland, who won it from Canterbury in Round 3 of the Round Robin in the 2011 ITM Cup.Although the professional era of rugby has seen competitions such as the National Provincial Championship and its successor, the ITM Cup, and Super Rugby detracting from the pre-eminence of the Ranfurly Shield, many still regard it as the greatest prize in New Zealand provincial rugby, thanks to its long history, the fact that every challenge is a sudden-death defence of the Shield, and that any team, no matter how lowly, has a chance to win.

In 1901 the Governor of New Zealand, the Earl of Ranfurly, announced that he would present a cup to the New Zealand Rugby Football Union, to be used as the prize in a competition of their choosing. When the trophy, which actually turned out to be a shield, arrived, the NZRFU decided that it would be awarded to the union with the best record in the 1902 season, and thenceforth be the subject of a challenge system. Auckland, unbeaten in 1902, were presented with the...
Read More