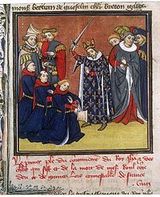 By the time of his capture in 1356, King John II's reign had been marked by tensions both within in his kingdom, and threats from outside. John's Valois claim on French territories was disputed by both Charles II of Navarre and Edward III of England. Vital provinces such as Normandy maintained a high level of autonomy from the crown and frequently threatened to disintegrate into private wars. Worse, many nobles had closer links to the English crown than to Paris. The Hundred Years War that had begun nineteen years before was not a modern war of nations; as one scholar has put it, it was 'an intermittent struggle... a coalition war, with the English often supported by Burgundians and Gascons, and even a civil war, whose combatants looked back to a heritage that was partly shared.'

The French defeat at Crecy under John's father, Philip VI of France and the loss of Calais had increased the pressures on the Valois family to achieve military success. John himself was an unlikely candidate as a warrior...
Read More