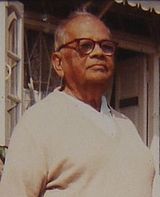 Description:
Ratnakar Hari Kelkar (Alibag, 22 June 1901 - New Delhi, 14 November 1985) was a revisor and translator of the Bible into Marathi.

R. H. Kelkar was born into a Christian family; his father Hari Govind Kelkar had accepted Christianity in 1881. After his father’s death in 1904, Kelkar had a difficult childhood. He studied in John Elphinstone School in Alibag but could not complete his education. He later moved to Bombay (now Mumbai) and after doing small jobs he got employment in a branch of the Bombay Post Office as a clerk. While working at the Post Office he continued his studies and received the BA degree of the University of Bombay in 1926. He worked in the Indian Postal Department for 34 years and retired in 1956 as the Deputy Presidency Post Master of Bombay GPO. While working in the Postal Service, he also studied accountancy and law, and cultivated a keen interest in religion, culture, history, language, and literature. After his retirement he served as the editor of the Marathi magazine Dnyanodaya from 1956 to 1963, and as a Professor of Marathi at the United Theological College, Pune until 1973. He died on 14 November 1985 at New Delhi, India.

The first Marathi translation of the Holy Bible had been published in the early years of the 19th century by William Carey and his associates at Serampore in West Bengal, India. Later translations and revisions were mostly carried out by committees appointed by the Bible Society in India from time to...
Read More