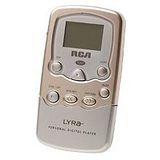 Description:
right|130px|PDP-2860Lyra is a series of portable media players developed and sold by RCA.

The 2201 is one of, if not the oldest Lyra made by RCA/Thomson. Originally sold with a 32MB CF card, it has a 1" x 3/4" backlit monochrome display, software five band graphic equalizer, and an external power jack. This series of players requires a proprietary CF reader used in conjunction with specific media players in Windows in order to write files to the card. A supported setup would take a blank CF card, recognize the correct reader attached to the PC, and then while syncing songs to the device, convert them to an encrypted version of Real Audio, MP3, MP3Pro, and later WMA format that is unrecognizable to any other device. It also drops a folder title 'Pmp' onto the root level of the device, which contains the boot image, a config file, and one or more executable, wma.exe, mp3.exe, or rlm.exe. program, capable of playing unencrypted WMA files. This can be used in conjunction with a non-certified CF reader, making the device usable again to anyone who lost theirs and cannot acquire a new one. The only requirement then is to convert your MP3 files to WMA, using any number of free converters.

The device also supports much larger CF cards than it original shipped with, up to at least 512MB. At these sizes though, boot time becomes significantly long, as the Lyra scans the entire card before presenting you with any menu. With only 250MB of files, spread...
Read More