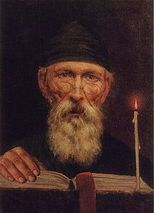 Description:
In some Christian churches, the Reader is responsible for reading aloud excerpts of the scripture at a liturgy. In early Christian times, the reader was of particular value, given the rarity of literacy.

In the Latin Rite of the Roman Catholic Church, the term "lector" is used in preference to that of "reader". The term can mean someone who in a particular liturgy is assigned to read a Biblical text other than the Gospel. (Reading the Gospel at Mass is reserved specifically to the deacon or, in his absence, to the priest.) But it also has the more precise meaning of a person who has been "instituted" (or, in some cases, "ordained") as a lector, and so is a lector even when not assigned to read in a specific liturgy. This is the meaning in which the term is used in this article.

In the Latin Catholic Church, the office of lector, in this sense, was formerly classed as one of the four minor orders and in recent centuries was generally conferred only on those preparing for ordination to the priesthood. With effect from 1 January 1973, the apostolic letter of 15 August 1972 decreed instead that:

2. What up to now were called minor orders are henceforth to be called ministries.
3. Ministries may be assigned to lay Christians; hence they are no longer to be considered as reserved to candidates for the sacrament of orders.
4. Two ministries, adapted to present-day needs, are to be preserved in the whole......
...