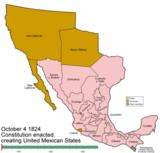 Description:
The term Reconquista (in English, "reconquest") was popularized by contemporary Mexican writers Carlos Fuentes and Elena Poniatowska to describe the increased demographic and cultural presence of Mexicans in the Southwestern United States.

It was originally a jocular analogy to the Spanish Reconquista of Moorish Iberia, since the areas of greatest Mexican immigration and cultural diffusion are conterminous with northern New Spain and former Mexican territories.

The concept, but not the term "reconquista" itself, has been advanced by Chicano nationalists of the 1970s to describe plans for the creation of a mythical Aztec homeland called Aztlán. Aztlan having been the northern origin of the Azteca people whom migrated south into Mexico and created Mexico, Tenochtitlan. The map used to illustrate the made up "Aztlan" has nothing at all to do with the "Aztec" (or "Mexica") tribe, which lived far south in what is now central Mexico, but it is rather, a map of land...
Read More