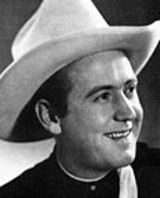 Description:
Clyde Julian Foley (June 17, 1910&ndash;September 19, 1968), better known as Red Foley, was an American singer, musician, and radio and TV personality who made a major contribution to the growth of country music after World War II.

For more than two decades, Foley was one of the biggest stars of the genre, selling more than 25 million records. His 1951 hit, "Peace in the Valley", was among the first million-selling gospel records. A Grand Ole Opry veteran until his death, Foley also hosted the first popular country music series on network television, Ozark Jubilee, from 1955 to 1960.

He is a member of the Country Music Hall of Fame, which called him "one of the most versatile and moving performers of all time" and "a giant influence during the formative years of contemporary Country music."

Foley was born June 17, 1910 on a farm in Blue Lick, Kentucky, grew up in nearby Berea, and gained the nickname Red for his hair color. He was born into a musical family; and by the time he was nine, was giving impromptu concerts at his father's general store, playing French harp, piano, banjo, trombone, harmonica and guitar. At 17, he won first prize in a statewide talent show. He graduated from Berea High School, and later worked as a $2-a-show usher and singer at a theater in Covington, Kentucky.

In 1930, as a freshman at Georgetown College, Foley was chosen by a talent scout from Chicago's WLS-AM to sing...
Read More