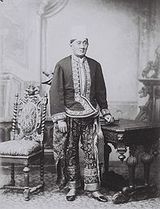 Description:
A regency (Indonesian: kabupaten) is a political subdivision of a province in Indonesia. The Indonesian term kabupaten is also sometimes translated as 'district' or 'municipality'. Regencies are divided into Subdistricts (Kecamatan).

The English name "regency" comes from the Dutch colonial period, when regencies were ruled by bupati (or regents) and were known as regentschap (kabupaten in Javanese and subsequently Indonesian). Bupati had been regional lords under the pre-colonial monarchies of Java. When those monarchies were abolished or curtailed by the Dutch, the bupati were left as the most senior indigenous authority. They were not strictly speaking "native rulers" because the Dutch claimed full sovereignty over their territory, but in practice they had many of the attributes of petty kings (including elaborate regalia and palaces, and a high degree of impunity). Regencies in Java territorial units were grouped together into Residencies headed by exclusively European Residents. This term hinted that the Residents had a quasi-diplomatic status in relation to the bupati (and indeed they had such a relationship with the native rulers who continued to prevail in much of Indonesia outside Java), but in practice the bupati had to follow Dutch instructions on any matter of concern to the colonial authorities. The relationship between those sides was ambivalent: while legal and military power rested with the Dutch government (or, for a long...
Read More