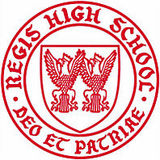 Description:
Regis High School is a private Jesuit university-preparatory school for academically gifted Roman Catholic young men. The school is located on the Upper East Side of Manhattan in New York City. Annual class enrollment is limited to approximately 135 male students from the New York, New Jersey, and Connecticut tri-state area. The school's motto, "Deo et Patriae" (For God and Country), speaks to its intention to produce a man committed to devoting the advantages of his education to the service of society and the underprivileged. All students at Regis receive a tuition-free education. Regis is widely considered a "feeder school" to the top colleges and universities in the nation.

Regis High School was founded in 1914 through the financial bequest of a single formerly anonymous benefactress: Julia M. Grant, the widow of Hugh J. Grant. She stipulated that her gift be used to build a Jesuit high school providing a free education for Catholic boys with special consideration given to those who could not otherwise afford a Catholic education. Heavily involved with the Church, the Grants' former home currently houses the Vatican Observer to the United Nations as well as the Pope when he visits New York City.

More than 95 years after Regis was founded, a documentary about the school was shown on October 26, 2009...
Read More