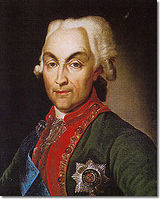 Description:
The Repnin Sejm () was a Sejm (session of the parliament) of the Polish–Lithuanian Commonwealth that took place between 1767 and 1768 in Warsaw. This session followed the Sejms of 1764 to 1766, where the newly elected King of Poland, Stanisław August Poniatowski, attempted with some successes to push through reforms to strengthen the government of the Commonwealth. These reforms were viewed as dangerous by Poland's neighbors, who preferred a weak Commonwealth and did not want to see it threaten their own political and military aspirations. The Russian Empire sent ambassador Nicholas Repnin, who became the driving force behind the Sejm proceedings. The Repnin Sejm marked one of the important milestones in increasing Polish dependence on the Russian Empire, and turning it into a Russian protectorate. This dependent position was bluntly spelled out in Nikita Ivanovich Panin's letter to King Poniatowski, in which he made it clear that Poland was now in the Russian sphere of influence.

The Ambassador of the Russian Empire to Warsaw Prince Nicholas Repnin received orders from Russian Empress Catherine the Great to bribe and coerce the Sejm deputies in order to push legislation favourable to Russia, in effect "a carefully drafted plan for destroying the republic". At that time Poland had a population of about 11.5 million, out of which about 1 million were non-Catholics.<ref...
Read More