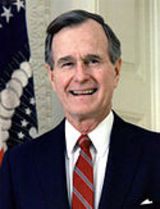 Description:
For only the third time in the 20th century, after the elections of 1912 and 1976, a sitting Republican president was seriously challenged for his party's nomination. President George H. W. Bush was challenged by conservative commentator Pat Buchanan, and during the early counting of the votes at the New Hampshire primary, it appeared that the president might actually lose. However, Buchanan faded by the end of the evening, and Bush won all the rest of the primaries. Bush's margins in many of the primaries weren't as large as expected, and led to the rise of Ross Perot as an independent candidate.

Former Democrat, and Louisiana State Represenative David Duke also ran in a number of primaries, but he didn't receive any delegates. Former Governor Harold Stassen of Minnesota also made a quixotic bid for support in the Minnesota primary, winning enough votes to entitle him to one delegate, but was later denied his single vote by machinations at the Minnesota Republican......
Read More