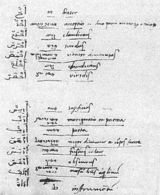 Revival Of The Hebrew Language

Revival of the Hebrew language

Description:
<!-- Unsourced image removed: -->The revival of the Hebrew language was a process that took place in Europe and Israel at the end of the 19th century and in the 20th century, through which the Hebrew language changed from a sacred language to a spoken and written language used in daily life. Modern Hebrew is, together with the literary Arabic language, the official language of the modern state of Israel, and even before the state's establishment it was one of the official languages of the British Mandate for Palestine. Not purely a linguistic process, the revival of Hebrew was part of an ideology associated with Zionism and the establishment of the State of Israel in 1948.

The process of Hebrew's return to regular usage is unique; there are no other examples of a sacred language becoming a national language with millions of first language speakers.

The revival also brought with it linguistic changes to the language. Despite the fact that the leaders of the process insisted they were only continuing "from the place where vitality was ended," they in fact created a new situation for the language<!--what does this mean?-->, the characteristics of which are derived from all periods of the Hebrew language and also from European languages, chief among them Yiddish.

For 1,300 years, from the conquest of the Land of Israel in 1200 BCE until the Bar Kokhba war in 135 CE, Jews spoke Hebrew. (From about the 6th century BCE until the Middle Ages, many...
Read More