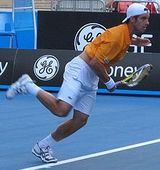 Description:
Richard Gasquet () (born 18 June 1986) is a French professional tennis player. He won the mixed doubles Grand Slam title at the 2004 French Open, partnering Tatiana Golovin. His highest ranking in singles is #7. His best achievements in tennis are reaching the semi-finals of Wimbledon in 2007 and later that year qualifying for the Tennis Masters Cup. Gasquet is best known for his long winding groundstrokes and his one-handed backhand.

Richard Gasquet was born in Béziers in the Languedoc-Roussillon region. He is the only child in the family. He began playing tennis at the age of 4 under the guidance of his father, Francis, who ran a tennis club, the TC Sérignan, along with his mother Maryse. He appeared on the cover of French Tennis Magazine aged only 9, and was touted as an extremely promising prospect even at such an early age. He was coached by his father during his junior career, and by Tarik Benhabiles for a short period. Since turning professional he has been coached by Eric Deblicker and Guillame Peyre. In February 2010, he hired coach Gabriel Markus, who has worked with Marat Safin and David Nalbandian in the past.

He made his debut on the ATP tour in April 2002, at the Tennis Masters Series tournament at Monte Carlo where he received a wildcard into qualifying and became the youngest player ever to qualify for a Tennis Masters event. At the age of 15 years, 10 months, he defeated Argentina's Franco Squillari in the...
Read More